The Victorian Trugo Association invites you to be part of history and play a game of Trugo today.

This unique local sport of Melbourne is played in the suburbs of Ascot Vale, Brunswick, Footscray, Port Melbourne, Sandridge, South Melbourne and at the home of Trugo, Yarraville.

With the changing population in these areas and the traditional players of retired persons on the decline, Trugo needs new players to keep the sport alive. 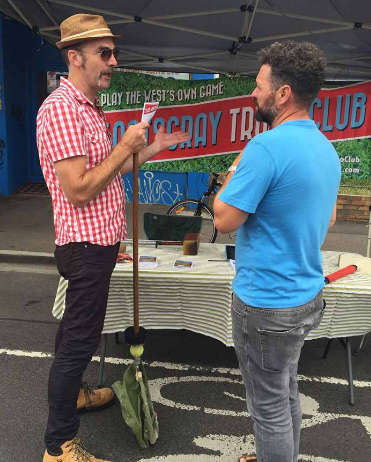 Footscray Trugo Club - Stuart Lucca-Pope
So if your tired of tennis & bored with bowls?
Come and have a go at Trugo.

Trugo is a 'true blue aussie game' played on a grass court by hitting rubber rings with a wooden mallet from one end of the green to goal posts at the other.

It is like a cross between croquet, wood chopping, lawn bowls and AFL football!

When is it played?

Thursdays, the Trugo season runs from August to April.

How long does the game take to play?

Trugo takes about one and a half hours to play.

What is the cost?

The teams pay $15 per year per person for registration; each of the clubs have their own in house method of raising additional moneys.

What age do you have to be?

The game of Trugo is open to people of all ages.

The game of Trugo was invented by Thomas Grieves of Yarraville in 1926. Inspired by the skylarking behaviour of fellow workmen at the Newport railway yards hitting train components around the workshop he devised a game he called Tru-Go. 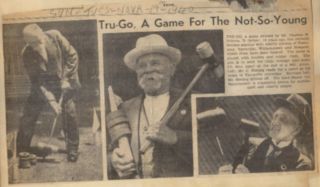 By the late 1930s regular games where being played in the Yarraville gardens between teams from around the local area. 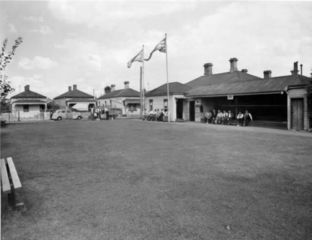 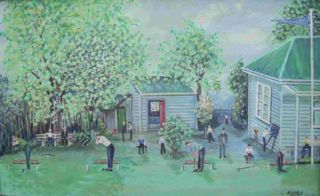 Other suburbs follow and start construction of pavilions and greens for the new sport of Trugo. 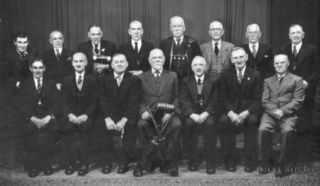 Can you help identify any of these men?

...you really do get a feeling that time has stood still. 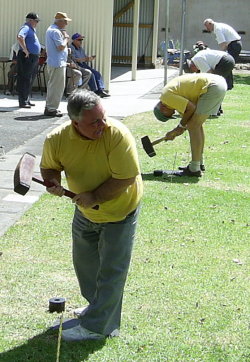